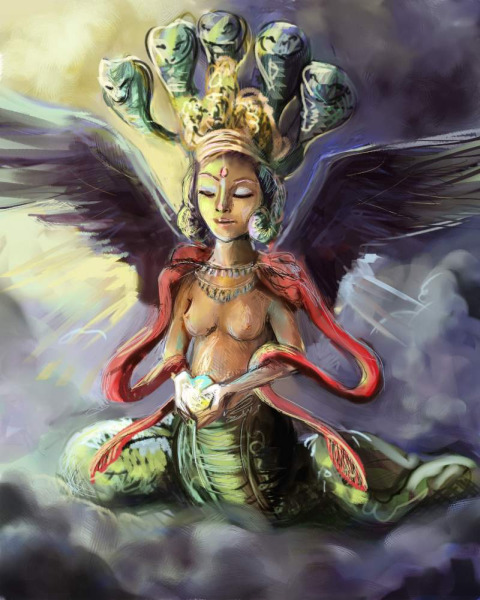 I’ve always “walked on the Dark Side,” from my days as a high school Goth kid through my explorations of Witchcraft, I’ve never feared the shadowy depths. So it was unsurprising to me when I took a job working at a funeral home. I was 22 and knew that this was a part of my spiritual work. It was indeed an initiation of its own kind during a period of intense spiritual work and transformation, and I got a crash course in working with the Spirits of the Dead. Looking back I see how it was all interconnected.

I had been working towards my Reiki attunements for a couple of months. Receiving my Reiki 1 had left me a very sudden vegetarian, unable to stomach meat any longer. The Reiki work had opened up centers of compassion and empathy that I had not tapped in to, and I was feeling quite open and raw and vulnerable to the world.

It was now early fall, and our group was ready to receive the Reiki 2 attunements. Our teacher also coordinated regular shamanic retreats with experienced practitioners from the area, and offered attendance at the retreat to us as a part of our training. We met on Friday evening to receive our attunements, and then prepared for the retreat weekend.***

It never occurred to me that an initiation into working with energy that was considered “light” would open me up to a much more intimate connection with the “dark.”

Our first activity on Saturday was a women’s sweatlodge. As a bunch of women’s spiritualists/Dianics/Feminists, the general consensus was that sweatlodges were an ‘unnecessary punishment on the body’*** so everyone agreed to a modified sweat in which after each pour you could go outside if you chose. Of course, this was Florida and though it was fall it was still as hot and humid outside the lodge as it was inside.

It was here that I received my first strong encounter with Hekate. Her Strophalos spun in front of me and Her face radiated at me, from the steam, behind my eyes, all around me… I couldn’t tell where She was exactly except everywhere. Her message shook me to the bones.

Later, I went for a walk in the scrubby, swampy forest where we were camping, and came upon a tree that introduced me to the Phoenix… this spirit, this tree, had been burned multiple times, and also had a message for me. Life and Death were here, intimately connected.

The next day the whole group (the retreat was open to the community and to all genders) gathered in the hall for more teachings on shamanism and a journey. Many covens and groves held regular rituals here, so the place was already steeped in magic.

The teachers did their thing, talking to us about forms of journey work, and introducing us to the method that would be used. Finally we all settled down, lying on the cool floor or on blankets, and the teachers began chanting and drumming. My teacher spoke to us and asked for our guides to make themselves known.

Suddenly, the chanting I heard in my head was Naga Naga Naga Naga… and I saw a great serpent slide over and rise above me. First she appeared entirely as a snake, then she shifted and her tail was of a green serpent and her torso was that of a woman, large wings spread from her back, and snakes rose above her head. She too had a message for me, and then began to sing.

She said “This is your death song. Use it well” That chant would continue to reverberate in my mind for months, deepening and swirling in serpentine beauty.

I chanted it around fires of transformation, I sang it over waters of sorrow, I hummed it over the deaths of loved ones. I sing it whenever I encounter a land that has been raped and razed.

And sometimes, I forget the power of it. I forget this gift that I was given. I forget to sing. And then, it will start to hum in my mind, the incantation never forgotten, the blended tones and cantillation of innumerable voices from aeons past and future reverberating in my body until I can no longer contain it and it erupts from my throat and pours from my mouth in an ecstatic sadness. The Naga rises above me again, her wings wide, her tail uncoiled, her hands cupping the joy and sorrow and wisdom. Then I remember the duty I have, the responsibility I have been given, the witnessing that I must bear. A tear falls from my eye, and I seek out the land that calls to be sung for.

***Since this time, my feelings about participating in “shamanic” retreats that incorporate spiritual practices of the First Nations have shifted. But at the time, it was a potent experience that eventually led me to a deeper understanding of Indigenous cultures.

Hour Four (reminder that these are first thoughts and unedited)

Do not resist
this
Desire burns within you,
This serpent of tantric flame
has a purpose far greater
than the physical, sexual.

It is burning you from the inside out
Razing you of your illusions
and your apathy
Re-membering you
of the power you possess.

Rise. Rise. Rise up.
Let the undulations root you
into the ecstasy of resistance
Resist the power outside of you
The passion filling you
and moving you
to action.

Join me on Patreon!